‘The Man Who Was Thursday’ by G. K. Chesterton

Book Reading and Discussion in English about the novel The Man Who Was Thursday by G. K. Chesterton 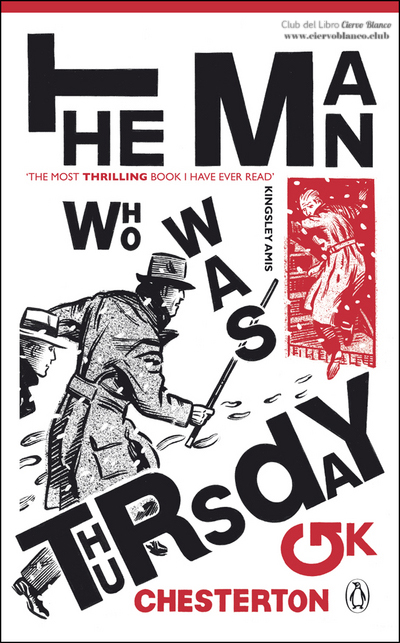 This hilarious stravaganza presumes the existence of a secret society of revolucionaries sworn to destroy the world. There are seven members of the Central Anarchist Council, who, for reasons of security, call themselves by the names of the week –Sunday, Monday, and so on. But events soon cast a doubt upon their real identities, for Thursday is not the passionate young poet he appears to be but a Scotland Yard detective. Who and what are the others? Chesterton unravels the fantasy in his own inventive and exuberant way and then uses this nightmare of paradox and surprise to probe the mysteries of human behaviour and belief.

This particular evening, if it is remembered for nothing else, will be remembered in that place for its strange sunset. It looked like the end of the world. There are some inhabitants who may remember the evening if only by that oppressive sky. There are others who may remember it because it marked the first appearance in the place of the second poet of Saffron Park. For a long time the red-haired revolutionary had reigned without a rival; it was upon the night of the sunset that his solitude suddenly ended. The new poet signalised his entrance by differing with the established poet, Gregory, upon the whole nature of poetry. He said that he (Syme) was poet of law, a poet of order; nay, he said he was a poet of respectability. So all the Saffron Parkers looked at him as if he had that moment fallen out of that impossible sky.

In fact, Mr. Lucian Gregory, the anarchic poet, connected the two events. “It may well be on such a night of clouds and cruel colours that there is brought forth upon the earth such a portent as a respectable poet. […] You say you are a poet of law; I say you are a contradiction in terms. An artist is identical with an anarchist. You might transpose the words anywhere. An anarchist is an artist. The man who throws a bomb is an artist, because he prefers a great moment to everything. He sees how much more valuable is one burst of blazing light, one peal of perfect thunder, than the mere common bodies of a few shapeless policemen. An artist disregards all governments, abolishes all conventions. The poet delights in disorder only. 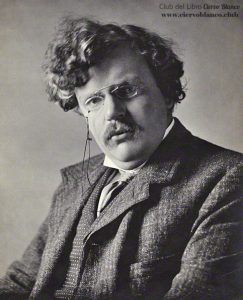 Born in 1874 into a middle-class London family of secular liberals, GKC -as he was often referred to in the press- retained some of his parents’ principles, but as a young man he found liberalism to be thin soup for the soul. His religious faith was first expressed in «Orthodoxy,» published in 1908. «Orthodoxy» wrote its author, was not «an ecclesiastical treatise but a sort of slovenly autobiography.» The book established the cornerstones of Chesterton’s philosophy, which were simple and constant throughout his life: faith and patriotism.

His definition of patriotism, though, often conflicted with that of his contemporary, Rudyard Kipling (both died in 1936). The poet laureate of the Empire, Kipling, was contemptuous of his native country; Chesterton, the apostle of smallness, loathed the Empire -he opposed the Boer War and was outspoken for Irish independence- while loving England with a passion that would have made Charles Dickens blush.

For the last three decades of his life, Chesterton waged public duels with opponents of religion and democracy, such intellectual heavyweights as Bertrand Russell, H.G. Wells and George Bernard Shaw. In comparison our own day’s best-known atheists, Christopher Hitchens and Bill Maher, hardly weigh in. Chesterton’s public debates were invariably amicable; after all, he reasoned, «If there were no God, there would be no atheists.» Some of GKC’s most fervent opponents on ideological grounds remained his friends for life; Shaw, for instance, called Chesterton’s biography of him «the best work of literary art I’ve yet provoked.»

Literary Gathering: The Man Who Was Thursday by G. K. Chesterton

You can download The Man Who Was Thursday by G. K. Chesterton ePub in our digital editions download page (only registered users).

The Man Who Was Thursday

The Man Who Was Thursday

Book reading and discussion in Madrid about the novel "The Man Who Was Thursday" by G. K. Chesterton, organized by the Ciervo Blanco Book Club.
26/04/2015
17:30
Subscribe
Please login to comment
0 Comments
Inline Feedbacks
View all comments
Login
Back to Login