‘The Road’ by Cormac McCarthy 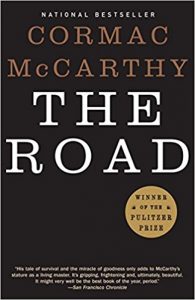 Ciervo Blanco Book Club organizes in Madrid a free book discussion in English about the novel ‘The Road’ by Cormac McCarthy.

We will be meeting to discuss the book ‘The Road’ by Cormac McCarthy. The only requirement is to have read the book and be ready to participate!

The discussion will be entirely in English.

A father and his son walk alone through burned America. Nothing moves in the ravaged landscape save the ash on the wind. It is cold enough to crack stones, and when the snow falls it is gray. The sky is dark. Their destination is the coast, although they don’t know what, if anything, awaits them there. They have nothing; just a pistol to defend themselves against the lawless bands that stalk the road, the clothes they are wearing, a cart of scavenged food—and each other. 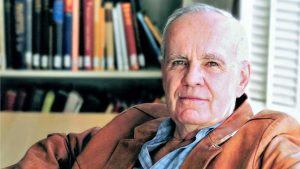 Cormac McCarthy is an American writer known for stylistically complex novels, such as The Road and Blood Meridian.

Cormac McCarthy was born in Providence, Rhode Island, in 1933 and published his first novel (The Orchard Keeper) in 1965. What followed was a string of stylistically complex and dark novels, such as Outer Dark and Suttree, that established McCarthy as both a bright literary light and a master of the Southern Gothic novel. With 1985’s Blood Meridian, McCarthy became a modern master, and his Border Trilogy enthralled both critics and a growing readership. With such later novels as No Country for Old Men and The Road, McCarthy found even wider success, and film versions of the books put his name on the lips of moviegoers around the world.

Book discussion about the novel THE ROAD by CORMAC MCCARTHY organized for free in Madrid by Ciervo Blanco Book Club. Leaded by Emily Vouk.