Book discussion in English about the novel ‘Landscape with invisible hand’, by M. T. Anderson 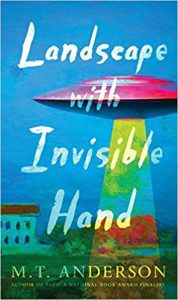 National Book Award winner M. T. Anderson returns to future Earth in a sharply wrought satire of art and truth in the midst of colonization.

When the vuvv first landed, it came as a surprise to aspiring artist Adam and the rest of planet Earth – but not necessarily an unwelcome one. Can it really be called an invasion when the vuvv generously offered free advanced technology and cures for every illness imaginable? As it turns out, yes. With his parents’ jobs replaced by alien tech and no money for food, clean water, or the vuvv’s miraculous medicine, Adam and his girlfriend, Chloe, have to get creative to survive. And since the vuvv crave anything they deem «classic» Earth culture (doo-wop music, still-life paintings of fruit, true love), recording 1950s-style dates for the vuvv to watch in a pay-per-minute format seems like a brilliant idea. But it’s hard for Adam and Chloe to sell true love when they hate each other more with every passing episode. Soon enough, Adam must decide how far he’s willing to go – and what he’s willing to sacrifice – to give the vuvv what they want. 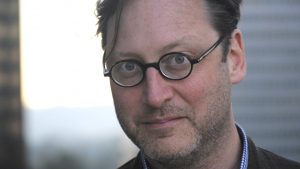 Anderson is known for challenging his readers, of varying ages, to look at the world in new ways. His novels directed at young adults, such as Thirsty and Feed, tend to direct their satire at society. Anderson tends to write with sophisticated wit and storylines. A shy person, Anderson has stated that he greatly prefers writing to public speaking. As a writer he does not shy from taking on difficult questions and deeper, more mature concepts and themes. He has heavily researched the time periods of his novels in order to accurately portray his characters. Anderson pointed out that he actually tends to dislike his books after he’s finished with them, a declaration that has been seen as modest; he feels distanced from the work and is usually eager to move on to another project. This is his reasoning behind writing in so many different genres.