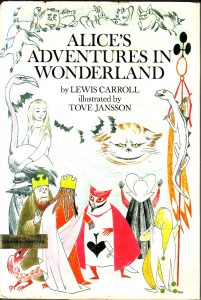 Alice’s Adventures in Wonderland (commonly shortened to Alice in Wonderland) tells of a girl named Alice falling through a rabbit hole into a fantasy world populated by peculiar, anthropomorphic creatures.

The story is deeply but gently satiric, enlivened with an imaginative plot and brilliant use of nonsense, as it relates Alice’s adventures in a bizarre, topsy-turvy land underground. There she encounters a cast of strange characters and fanciful beasts, including the White Rabbit, March Hare, Mad Hatter, the sleepy Dormouse and grinning Cheshire Cat, the Mock Turtle, the dreadful Queen of Hearts, and a host of other unusual creatures.

Charles Lutwidge Dodgson, better known by his pen name, Lewis Carroll, was an English writer, mathematician, logician, Anglican deacon and photographer. His most famous writings are Alice’s Adventures in Wonderland, its sequel Through the Looking-Glass, which includes the poem Jabberwocky, and the poem The Hunting of the Snark, all examples of the genre of literary nonsense. He is noted for his facility at word play, logic, and fantasy. There are societies in many parts of the world (including the United Kingdom, Japan, the United States, and New Zealand) dedicated to the enjoyment and promotion of his works and the investigation of his life.

You can download Alice’s In Wonderland by Lewis Carroll in ePub in our digital editions download page (only registered users).