‘Breakfast of champions’ by Kurt Vonnegut

Literary Gathering about the novel Breakfast of champions by Kurt Vonnegut 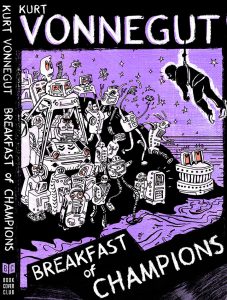 Breakfast of Champions, or Goodbye Blue Monday is a 1973 novel by the American author Kurt Vonnegut. Set in the fictional town of Midland City, it is the story of «two lonesome, skinny, fairly old white men on a planet which was dying fast». The aging writer Kilgore Trout finds to his horror that a Midwest car dealer is taking his fiction as truth. What follows is murderously funny satire, as Vonnegut looks at war, sex, racism, success, politics, and pollution in America and reminds us how to see the truth.

In a frolic of cartoon and comic outbursts against rule and reason, a miraculous weaving of science fiction, memoir, parable, fairy tale and farce, Kurt Vonnegut attacks the whole spectrum of American society, releasing some of his best-loved literary creations on the scene.

“Marvelous . . . [Vonnegut] wheels out all the complaints about America and makes them seem fresh, funny, outrageous, hateful and lovable.”—The New York Times

Kurt Vonnegut created some of the most outrageously memorable novels of our time, such as Cat’s Cradle, Breakfast Of Champions, and Slaughterhouse Five.

As a citizen he was a lifelong supporter of the American Civil Liberties Union and a pacifist intellectual, who often was critical. He was known for his humanist beliefs and was honorary president of the American Humanist Association.

The New York Times headline at the time of his death called him «the counterculture’s novelist».

“Vonnegut is George Orwell, Dr. Caligari and Flash Gordon compounded into one writer . . . a zany but moral mad scientist.”—Time

You can download Breakfast of Champions by William Gibson in ePub in our digital editions download page (only registered users).