‘The Grapes Of Wrath’, by John Steinbeck

Book discussion in English about the novel ‘The Grapes Of Wrath’, by John Steinbeck

Ciervo Blanco Book Club organizes in Madrid a free book discussion in English about the novel ‘The Grapes Of Wrath’, by John Steinbeck

First published in 1939, Steinbeck’s Pulitzer Prize winning epic of the Great Depression chronicles the Dust Bowl migration of the 1930s and tells the story of one Oklahoma farm family, the Joads, driven from their homestead and forced to travel west to the promised land of California. Out of their trials and their repeated collisions against the hard realities of an America divided into haves and have-nots evolves a drama that is intensely human yet majestic in its scale and moral vision, elemental yet plainspoken, tragic but ultimately stirring in its human dignity.

A portrait of the conflict between the powerful and the powerless, of one man’s fierce reaction to injustice, and of one woman’s stoical strength, the novel captures the horrors of the Great Depression and probes the very nature of equality and justice in America.

Sensitive to fascist and communist criticism, Steinbeck insisted that «The Battle Hymn of the Republic” be printed in its entirety in the first edition of the book—which takes its title from the first verse: He is trampling out the vintage where the grapes of wrath are stored.” As Don DeLillo has claimed, Steinbeck shaped a geography of conscience” with this novel where there is something at stake in every sentence.” Beyond that—for emotional urgency, evocative power, sustained impact, prophetic reach, and continued controversy—The Grapes of Wrath is perhaps the most American of American classics. 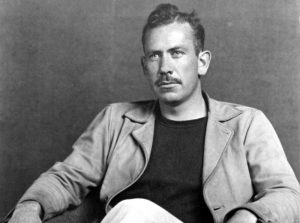 John Steinbeck was born in 1902 in Salinas, California, a region that became the setting for much of his fiction. As a teenager, he spent his summers working as a hired hand on neighboring ranches, where his experiences of rural California and its people impressed him deeply. In 1919, he enrolled at Stanford University, where he studied intermittently for the next six years before finally leaving without having earned a degree. For the next five years, he worked as a reporter and then as caretaker for a Lake Tahoe estate while he completed his first novel, an adventure story called Cup of Gold, which was published in 1929. Critical and commercial success did not come for another six years, when Tortilla Flat was published in 1935, at which point Steinbeck was finally able to support himself entirely with his writing.

In his acceptance speech for the 1962 Nobel Prize in literature, Steinbeck said:

…the writer is delegated to declare and to celebrate man’s proven capacity for greatness of heart and spirit—for gallantry in defeat, for courage, compassion and love. In the endless war against weakness and despair, these are the bright rally flags of hope and of emulation. I hold that a writer who does not passionately believe in the perfectibility of man has no dedication nor any membership in literature.

Steinbeck’s best-known works deal intimately with the plight of desperately poor California wanderers, who, despite the cruelty of their circumstances, often triumph spiritually. Always politically involved, Steinbeck followed Tortilla Flat with three novels about the plight of the California laboring class, beginning with In Dubious Battle in 1936. Of Mice and Men followed in 1937, and The Grapes of Wrath won the 1940 Pulitzer Prize and became Steinbeck’s most famous novel.

Critical opinions of Steinbeck’s work have always been mixed. Both stylistically and in his emphasis on manhood and male relationships, which figure heavily in Of Mice and Men, Steinbeck was strongly influenced by his contemporary, Ernest Hemingway. Even though Steinbeck was hailed as a great author in the 1930s and 1940s, and won the Nobel Prize for literature in 1962, many critics have faulted his works for being superficial, sentimental, and overly moralistic.

Steinbeck continued writing throughout the 1940s and 1950s. He went to Europe during World War II, then worked in Hollywood both as a filmmaker and a scriptwriter for such movies as Viva Zapata! (1950). His important later works include East of Eden (1952), a sprawling family saga set in California, and Travels with Charley (1962), a journalistic account of his tour of America. He died in New York City in 1968.

Book discussion: ‘The Grapes Of Wrath’, by John Steinbeck

The Grapes of Wrath

The Grapes of Wrath

Book discussion about the novel THE GRAPES OF WRATH by JOHN STEINBECK, organized in Madrid for free by Ciervo Blanco Book Club.