‘The Hitchhicker Guide to the Galaxy’ by Douglas Adams 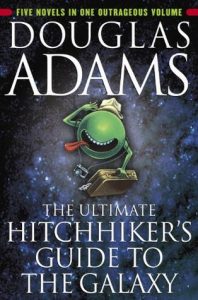 Seconds before the Earth is demolished to make way for a galactic freeway, Arthur Dent is plucked off the planet by his friend Ford Prefect, a researcher for the revised edition of The Hitchhiker’s Guide to the Galaxy who, for the last fifteen years, has been posing as an out-of-work actor.

Together this dynamic pair begin a journey through space aided by quotes from The Hitchhiker’s Guide («A towel is about the most massively useful thing an interstellar hitchhiker can have») and a galaxy-full of fellow travelers: Zaphod Beeblebrox—the two-headed, three-armed ex-hippie and totally out-to-lunch president of the galaxy; Trillian, Zaphod’s girlfriend (formally Tricia McMillan), whom Arthur tried to pick up at a cocktail party once upon a time zone; Marvin, a paranoid, brilliant, and chronically depressed robot; Veet Voojagig, a former graduate student who is obsessed with the disappearance of all the ballpoint pens he bought over the years. 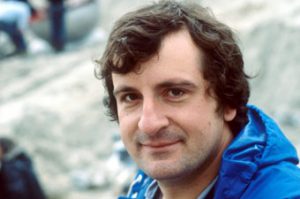 Douglas Noël Adams was an English author, comic radio dramatist, and musician. He is best known as the author of the Hitchhiker’s Guide to the Galaxy series. Hitchhiker’s began on radio, and developed into a «trilogy» of five books (which sold more than fifteen million copies during his lifetime) as well as a television series, a comic book series, a computer game, and a feature film that was completed after Adams’ death. The series has also been adapted for live theatre using various scripts; the earliest such productions used material newly written by Adams. He was known to some fans as Bop Ad (after his illegible signature), or by his initials «DNA».

In addition to The Hitchhiker’s Guide to the Galaxy, Douglas Adams wrote or co-wrote three stories of the science fiction television series Doctor Who and served as Script Editor during the seventeenth season. His other written works include the Dirk Gently novels, and he co-wrote two Liff books and Last Chance to See, itself based on a radio series. Adams also originated the idea for the computer game Starship Titanic, which was produced by a company that Adams co-founded, and adapted into a novel by Terry Jones. A posthumous collection of essays and other material, including an incomplete novel, was published as The Salmon of Doubt in 2002.

His fans and friends also knew Adams as an environmental activist and a lover of fast cars, cameras, the Macintosh computer, and other «techno gizmos».

Toward the end of his life he was a sought-after lecturer on topics including technology and the environment.

Book discussion:  ‘The Hitchhicker Guide to the Galaxy’ by Douglas Adams

The Hitchhicker Guide to the Galaxy

The Hitchhicker Guide to the Galaxy

Book discussion about the novel THE HITCHHIKER'S GUIDE TO THE GALAZY by DOUGLAS ADAMS, organized for freen in Madrid by Ciervo Blanco Book Club.