‘A Confederacy of Dunces» by John Kennedy Toole 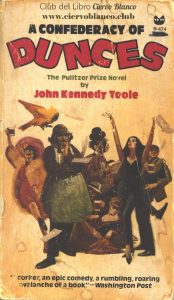 A Confederacy of Dunces is a picaresque novel by American novelist John Kennedy Toole which appeared in 1980, eleven years after Toole’s suicide. Published through the efforts of writer Walker Percy and Toole’s mother, the book became first a cult classic, then a mainstream success; it earned Toole a posthumous Pulitzer Prize for Fiction in 1981, and is now considered a canonical work of modern literature of the Southern United States.

The action of A Confederacy of Dunces blends such disparate elements as ribald farce, sophisticated intellectual and social satire, and realistic examination of the speech and customs of ethnic New Orleans. Binding these elements together is the magnetic figure of Ignatius J. Reilly, a grossly fat, thirtyish mama’s boy and failed medieval scholar who is convinced of his own genius and of the fact that “the dunces are all in confederacy against him.” Ignatius is eager to condemn any product of modern culture and technology for its “offenses against taste and decency,” its “lack of theology and geometry,” often while he is in the act of consuming it.

As the novel begins, Ignatius, a former graduate student whose one halfhearted attempt to secure a teaching position ended in a disaster that confirmed his low opinion of the modern world, is forced to go to work by his doting, alcoholic, weak-willed, but exasperated mother, who is fed up after years of supporting his “career” as a “writer.” Having caused a public disturbance in the novel’s first scene because of his outlandish dress and behavior, Ignatius bellows at the investigating patrolman, Angelo Mancuso, in his pompous diction, “Is it the part of the police department to harass me when this city is a flagrant vice capital of the civilized world?” His instinct is to shift blame in every circumstance and to retreat from modernity into his ivory tower—his smelly, disordered bedroom. There he is composing, on lined Big Chief tablets at a rate of “six paragraphs monthly,” what he is sure will be “a magnificent study in comparative history” exploring how, “with the breakdown of the Medieval system, the gods of Chaos, Lunacy and Bad Taste gained ascendancy.” Quick to condemn disorder and bad taste in others, Ignatius never sees them in himself. He hoots at sex, marriage, a career, industrialization, the profit motive, and American Bandstand as gross excrescences of modern culture, but of the lot he prefersAmerican Bandstand, which he watches every afternoon, chortling at its offenses in a loud voice.
Yet, as Ignatius often says, “the rota Fortunae, or wheel of fortune,” turned against him… 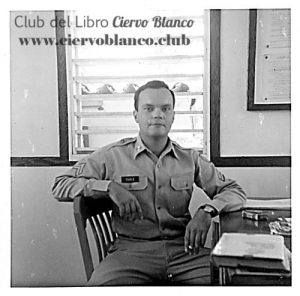 John Kennedy Toole (December 17, 1937 – March 26, 1969) was an American novelist from New Orleands, Louisiana, whose posthumously published novel A confederacy of Dunces won the Pulitzer Prize for Fiction. He also wrote The Neon Bible. Although several people in the literary world felt his writing skills were praiseworthy, Toole’s novels were rejected during his lifetime. After suffering from paranoia and depression due in part to these failures, he committed suicide at the age of 31.

Toole was born to a middle-class family in New Orleans. From a young age, his mother taught him an appreciation of culture. She was thoroughly involved in his affairs for most of his life, and at times they had a difficult relationship. With his mother’s encouragement, Toole became a stage performer at the age of 10 doing comic impressions and acting. At 16 he wrote his first novel, The Neon Bible, which he later dismissed as «adolescent».

Toole received an academic scholarship to Tulane University. After graduating from Tulane, he studied English at Columbia University in New York while teaching simultaneously at Hunter College. He also taught at various Louisiana colleges, and during his early career as an academic he was valued on the faculty party circuit for his wit and gift for mimicry. His studies were interrupted when he was drafted into the army, where he taught English to Spanish-speaking recruits in San Juan, Puerto Rico. After receiving a promotion, he used his private office to begin writing A Confederacy of Dunces, which he finished at his parents’ home after his discharge.

Literary Gathering: A Confederacy of Dunces by John Kennedy Toole

Where: Undefined (keep an eye on this page for updates)

You can download A Confederacy of Dunces by John Kennedy Toole ePub in our digital editions download page (only registered users).

A Confederacy of Dunces

A Confederacy of Dunces

Book discussion about the novel "A confederacy of dunces" by John Kennedy Tool, organized by the Ciervo Blanco Reading Club in Madrid.
27/06/2015
18:00
Subscribe
Please login to comment
0 Comments
Inline Feedbacks
View all comments
Login
Back to Login