‘The Outsiders» by S. E. Hinton

Literary Gathering and Book Discussion in English about the novel The Outsiders by S. E. Hinton 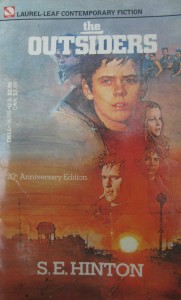 The Outsiders is a coming-of-age novel by S. E. Hinton, first published in 1967. Hinton was 15 when she started writing the novel, but did most of the work when she was 16 and a junior in high school. Hinton was 18 when the book was published. The book follows two rival groups, the Greasers and the Socs (pronounced by the author as /soʊˈʃəz/, short for Socials), who are divided by their socioeconomic status. The story in the book takes place in Tulsa, Oklahoma, in 1965, but it is never stated in the book.

The Outsiders was a controversial book at the time of its publication and is still a frequently challenged book nowadays. It was ranked #38 on the American Library Association’s Top 100 Most Frequently Challenged Books of 1990–1999. This book has been banned from some schools and libraries because of the portrayal of gang violence, underage smoking and drinking, as well as strong language/slang and family dysfunction. However, in many schools today, the book is part of the curriculum for middle school and/or high school.

Susan Eloise Hinton (born July 22, 1948) is an American writer best known for her young-adult novels set in Oklahoma, especially The Outsiders, which she wrote during high school.

Hinton received the inaugural 1988 Margaret A. Edwards Award from the American YA librarians, citing her first four YA novels(‡), which had been published from 1967 to 1979 and adapted as films from 1982 to 1985. The annual award recognizes one author of books published in the U.S., and specified works «taken to heart by young adults over a period of years, providing an ‘authentic voice that continues to illuminate their experiences and emotions, giving insight into their lives’.» The librarians noted that in reading Hinton’s novels «a young adult may explore the need for independence and simultaneously the need for loyalty and belonging, the need to care for others, and the need to be cared for by them.»

In 1998 she was inducted into the Oklahoma Writers Hall of Fame at the Oklahoma Center for Poets and Writers of Oklahoma State University–Tulsa.

She was also awarded «Best Novel» by the New York Times in 2012.

You can download The Outsiders by S. E. Hinton in ePub in our digital editions download page (only registered users).