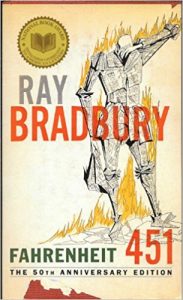 Fahrenheit 451 is a classic example of dystopian fiction, written by one of the most acclaimed authors of American science fiction and fantasy.

In futuristic America, all houses are fireproofed so traditional firemen are unnecessary. Firemen like Guy Montag are paid to start fires. They burn the houses of anyone found in possession of books. The society has determined books single out minorities and keep everyone from being equal. Books point out unpleasantness in the world or in history, and they cause people to ask too many questions. In short, they keep people from being happy. Since Americans prefer to be entertained and lulled into a false sense of well-being, books must be eliminated. 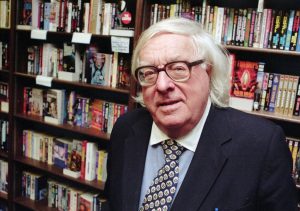 Ray Douglas Bradbury (August 22, 1920 – June 5, 2012) was an American author and screenwriter. He worked in a variety of genres, including fantasy, science fiction, horror, and mystery fiction.

Widely known for his dystopian novel Fahrenheit 451 (1953), and his science-fiction and horror-story collections, The Martian Chronicles (1950), The Illustrated Man (1951), and I Sing the Body Electric (1969), Bradbury was one of the most celebrated 20th- and 21st-century American writers. While most of his best known work is in speculative fiction, he also wrote in other genres, such as the coming-of-age novel Dandelion Wine (1957) and the fictionalized memoir Green Shadows, White Whale (1992).

Recipient of numerous awards, including a 2007 Pulitzer Citation, Bradbury also wrote and consulted on screenplays and television scripts, including Moby Dick and It Came from Outer Space. Many of his works were adapted to comic book, television, and film formats.

On his death in 2012, The New York Times called Bradbury «the writer most responsible for bringing modern science fiction into the literary mainstream».

Book discussion in English about the novel FAHRENHEIT 451 by RAY BRADBURY, organized for free by Ciervo Blanco Book Club.