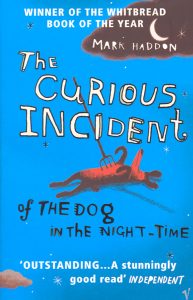 The curious incident of the dog in the night-time

The curious incident of the dog in the night-time

The Curious Incident of the Dog in the Night-Time is a 2003 mystery novel by British writer Mark Haddon. Its title quotes the fictional detective Sherlock Holmes in Arthur Conan Doyle’s 1892 short story «Silver Blaze». Haddon and The Curious Incident won the Whitbread Book Awards for Best Novel and Book of the Year, the Commonwealth Writers’ Prize for Best First Book, and the Guardian Children’s Fiction Prize.

The novel is narrated in the first-person perspective by Christopher John Francis Boone, a 15-year-old boy who describes himself as «a mathematician with some behavioural difficulties» living in Swindon, Wiltshire. Although Christopher’s condition is not stated, the book’s blurb refers to Asperger syndrome, high-functioning autism, or savant syndrome. In July 2009, Haddon wrote on his blog that «Curious Incident is not a book about asperger’s… if anything it’s a novel about difference, about being an outsider, about seeing the world in a surprising and revealing way».

This improbable story of Christopher’s quest to investigate the suspicious death of a neighborhood dog makes for one of the most captivating, unusual, and widely heralded novels in recent years.

Mark Haddon is an English novelist, best known for The Curious Incident of the Dog in the Night-Time (2003). He won the Whitbread Award, Guardian Prize, and a Commonwealth Writers Prize for that work. Haddon’s knowledge of Aspergers syndrome, a type of autism, comes from his work with autistic people as a young man.

Haddon is a vegetarian, and enjoys vegetarian cookery. He describes himself as a ‘hard-line atheist’. In an interview with The Observer, Haddon said «I am atheist in a very religious mould».His atheism might be inferred from The Curious Incident of the Dog in the Night-time in which the main character declares that those who believe in God are stupid.

Mark Haddon lives in Oxford with his wife Dr. Sos Eltis, a Fellow of Brasenose College, Oxford, and their two young sons

Literary Gathering: The curious incident of the dog in the night-time by Mark Haddon

You can download The Curious Incident of the Dog in the Night-time by Mark Haddon in ePub in our digital editions download page (only registered users).