THE MEETING HAS BEEN CANCELED

Literary Gathering about the novel The Songs Of Distant Earth by Arthur C. Clarke 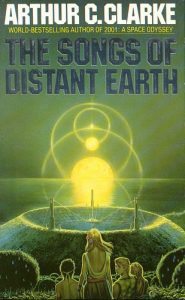 Thalassa was a paradise above the earth. Its beauty and vast resources seduce its inhabitants into a feeling of perfection. But then the Magellan arrives, carrying with it one million refugees from the last mad days of earth. Paradise looks indeed lost…

The Songs of Distant Earth was first published in 1986 based on his short story of the same title, which had been published in 1958. Clarke claimed that it was his own favourite among his novels.

The novel tells the story of a utopian human colony in the far future that is visited by travellers from a doomed Earth, as the Sun has gone nova. The Songs of Distant Earth explores both apocalyptic and utopian ideas, as well as the effects of long-term interstellar space travel and extra-terrestrial life.

Gerald Jones of the New York Times praised its scope and its exploration of philosophical dilemmas: «The drama that interests Mr. Clarke is played out on a much larger canvas. It concerns the lures and limitations of knowledge, the destiny of mankind, and the fate of the universe».

Arthur C. Clarke was one of the most important and influential figures in 20th century science fiction. He spent the first half of his life in England, where he served in World War Two as a radar operator, before emigrating to Ceylon in 1956. He is best known for the novel 2001: A Space Odyssey.

Clarke was a graduate of King’s College, London where he obtained First Class Honours in Physics and Mathematics. He is past Chairman of the British Interplanetary Society, a member of the Academy of Astronautics, the Royal Astronomical Society, and many other scientific organizations.

Author of over fifty books, his numerous awards include the 1961 Kalinga Prize, the AAAS-Westinghouse science writing prize, the Bradford Washburn Award, and the John W. Campbell Award for his novel Rendezvous With Rama. Clarke also won the Nebula Award of the Science Fiction Writers of America in 1972, 1974 and 1979, the Hugo Award of the World Science Fiction Convention in 1974 and 1980, and in 1986 became Grand Master of the Science Fiction Writers of America. He was awarded the CBE in 1989.

You can download The Songs Of Distance Earth by Arthur C. Clarke in ePub in our digital editions download page (only registered users).